Over the last quarter century, through extraordinary investments amounting to more than $1.7 trillion, U.S. broadband providers have led the transition from legacy communications networks to modern broadband and mobile networks.

Consumers and the economy have benefited from near-nationwide deployment of multiple networks with ever-expanding reach, capacity, and quality. Among the most significant achievements of our current broadband era is widespread facilities-based competition among networks, which creates a self-sustaining cycle of investment and innovation.

Last week, the Federal Communications Commission (FCC) took steps to bring more broadband to rural and unserved parts of the country. Tomorrow, USTelecom will weigh in explaining why the FCC should no longer mandate so-called network unbundling, a relic from a different (and far less competitive) era.

Internet data traffic is rising and demand will continue to grow as far as we can project. And while we have made much progress to speed the build-out of these next generation broadband networks and continue to narrow the digital divide, we need:

Sound policies that encourage investment will help maintain U.S. international broadband leadership and ensure the benefits of information-technology innovations flow to all Americans.

Key highlights from the USTelecom Industry Metrics and Trends 2020:

Consumers and providers have made the transition from legacy voice to broadband and mobile communications services.

Nearly all Americans have networks available to them, and providers have deployed increasingly fast broadband services.

The U.S. is an international broadband leader. 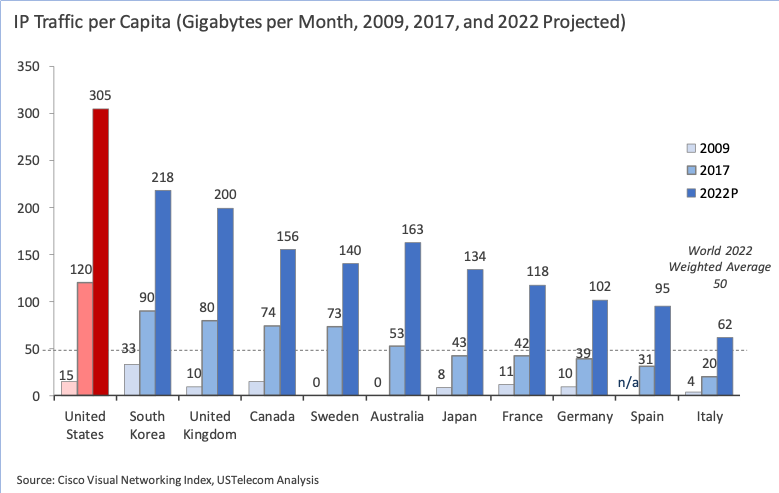 While the U.S. has made significant progress in deploying and utilizing broadband, challenges remain and the need to invest in expanding and upgrading networks is constant.