What is the Industry Traceback Group?

USTelecom leads the Industry Traceback Group (ITG), a collaborative effort of companies across the wireline, wireless, VoIP and cable industries that actively trace and identify the source of illegal robocalls. The ITG coordinates with federal and state law enforcement agencies to identify non-cooperative providers so they can take enforcement action, as appropriate. The ITG operates under the Communications Act (Section 222(d) (2)) which permit telecommunications carriers to disclose and/or permit access to Customer Proprietary Network Information (CPNI) if suspected fraud, abuse or unlawful use of services exist.

The mission of the ITG is to facilitate a neutral coordination platform for voice service providers to trace and identify the source of illegal robocalls to protect voice networks and consumers from fraudulent, abusive and/or unlawful robocalls. Learn more about the Origins of the ITG

How does traceback work?

Traceback is a cooperative effort by telecommunications providers that starts with a terminating service provider possessing evidence of suspicious traffic. Using a secured portal managed by USTelecom, the call is traced systematically back through various networks until it reaches non-responsive providers or the originator of the suspicious call is identified. 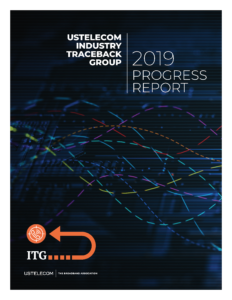 100+ companies have participated in ITG traceback investigations, resulting in more than 20 subpoenas and/or civil investigative demands from federal and state enforcement agencies.

How can I become a member of the Industry Traceback Group?

If you are interested in becoming a member of the ITG, click here. For information on how to respond to tracebacks, become a cooperative voice service provider in the fight against illegal robocalls, and follow industry best practices, download ‘ITG’s Policies and Procedures.’

Who participates in the Industry Traceback Group?

What is Government Saying about USTelecom’s ITG?

From the Federal Communications Commission (FCC) issued press release on July 27, 2020, designating ITG as the official consortium for coordinating industry-led efforts to trace back the origin of suspected unlawful robocalls:

The Industry Traceback Group has been and will continue to be a vital partner in our pursuit of unlawful robocallers. Protecting consumers against illegal spoofing and robocalls is our top consumer protection priority, and this industry consortium is a key contributor.” Rosemary Harold, Chief of the FCC Enforcement Bureau

Government and industry should always cooperate to fight illegal robocalls, but it is even more critical at a time when so many Americans are facing economic and health concerns. Companies across the telecommunications industry work together through the Industry Traceback Group (ITG) to trace and identify the originators of illegal robocalls. Over the course of the COVID-19 pandemic, the ITG has reported a wide variety of scam calls to the Federal Communications Commission, the Federal Trade Commission, the Department of Justice, and state attorneys general.”Letters sent June 25, 2020

The chief of the FCC’s Enforcement Bureau said ITG was “invaluable” in helping identify patterns and common sources of harmful traffic and the group was “instrumental” in helping the FCC achieve its top consumer protection goal – ending the twin abuses of illegal robocalls and illegal spoofed calls.

USTelecom has been particularly helpful in making sure that we can quickly trace scam robocalls to their originating source, and is an important ally in promoting broad industry participation in these traceback efforts.”FCC Chairman Ajit Pai

In June 2019, an FTC action against an illegal robocall scam acknowledged USTelecom’s help in bringing to justice an individual responsible for generating millions of illegal and spoofed robocalls and calls to numbers listed on the Do Not Call Registry.

In August 2019, 51 State Attorneys General and 12 national voice service providers announced their shared commitment to ending illegal robocalls, including a commitment to “allow for timely and comprehensive law enforcement efforts against illegal robocallers, [and to] dedicate sufficient resources to provide prompt and complete responses to traceback requests from law enforcement and from USTelecom’s Industry Traceback Group.”

In January 2020, the Department of Justice (DOJ) filed civil actions against companies and individuals allegedly responsible for carrying hundreds of millions of fraudulent robocalls to American consumers. The illegal robocalls originated in India, leading to massive financial losses for elderly and vulnerable consumers. USTelecom’s ITG was cited by DOJ for providing critical data to track down the scammers behind these calls.

How to Identify and Mitigate Illegal Robocalls