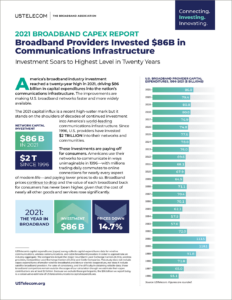 The 2021 capital influx is a recent high-water mark but it stands on the shoulders of decades of continued investment into America’s world-leading communications infrastructure. Since 1996, U.S. providers have invested $2 TRILLION into their networks and communities.

These investments are paying off for consumers. Americans use their networks to communicate in ways unimaginable in 1996— paying with millions trading daily commutes to online connections for nearly every aspect of modern life—paying lower prices to do so. Broadband prices continue to drop and the value of each broadband buck for consumers has never been higher, given that the cost of nearly all other goods and services rose significantly.