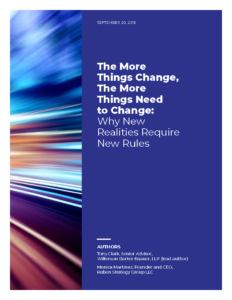 The paper describes the way some important aspects of the regulation of incumbent local exchange carriers (ILECs) has failed to evolve in the face of substantial competition, which hinders and affirmatively harms their ability to compete and frustrates efforts to close the rural digital divide. It describes how some regulations continue to apply as if price cap ILECs remain a monopoly with a guaranteed rate of return and the ability to ensure universal service through guaranteed access to subsidies, when, in fact, they are only one participant in a highly competitive marketplace and are on the verge of facing significant competition among numerous providers for continued access to federal subsidies. Specifically, the FCC’s Rural Digital Opportunity Fund (RDOF) will make $20.4 billion available over 10 years through a competitive auction in unserved parts of the country, including areas where the FCC has previously funded incumbent carrier networks.

The authors write: “In many areas the ILEC will compete successfully and continue to receive funds to serve those areas. In other areas, the FCC will award funds to a competitor to overbuild a previously government-funded network. The policy ramifications of this change are significant. Among the implications that should be clear is the following: when the ILEC is no longer receiving support and the FCC has sanctioned a new company to serve in its place, the ILEC should be relieved of all federal and state obligations to provide service in such areas. As government provided benefits are eliminated, associated government mandates to provide service must also fall by the wayside.”

Brought to you by Broadband: How Technology is Supporting Livable Cities