The Tradeoffs of Free

USTelecom CEO Jonathan Spalter was a featured speaker at a recent event in Washington, “The Cost of the Online World: Does Free Really Mean Free” which focused on what “free” actually means on the internet and how the current system of ad-supported businesses offering free services raise privacy and other concerns for consumers.

In an hour-long discussion, a panel of experts, including Spalter; John Mayo, a Georgetown University Professor of Economics; Kim Keenan, CEO of the Multicultural Media, Telecom and Internet Council and Stacey Gray, policy counsel of the Future of Privacy Forum discussed the tradeoffs consumers face as they navigate the online world.

Both Mayo and Spalter talked about the choices that consumers make when they decide to provide personal information to online companies in exchange for access to free content or services. The old adage, there’s no such thing as a free lunch, certainly applies online.

Certain information is anonymized and utilized to generate things like digital advertising that is highly relevant to recent shopping searches, Spalter noted. For regulators, the trade of personal data for free services raises two priorities: ensuring consumers reap the many bnefits of free, which helps make the full promise of broadband more readily accessible to everyone while protecting consumer privacy. 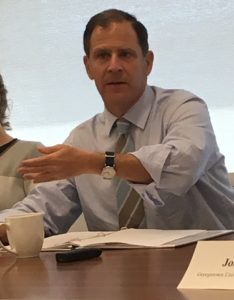 Spalter talked about why ISP’s did not support former Federal Communications Commission Chairman Tom Wheeler’s broadband privacy rules, which would have established different regulations for internet service providers than what are imposed on internet companies, such as social media networks.

Even though a vast majority of consumers have said they want all companies held to the same online privacy standards, the privacy rules rejected by Congress earlier this year did not apply to the internet giants which dominate digital advertising today, he noted.

Fortunately the FCC and FTC chairs agree the rules need to be harmonized to give consumers what they want—one strong set of uniform protections. Rep. Marsha Blackburn, Chairman of the House Communications and Technology Subcommittee, also recently introduced legislation that would require both ISPs and internet companies to follow the same online privacy rules. 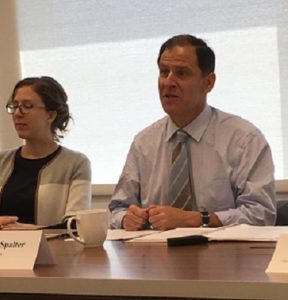 “We need to harmonize our privacy rules,” he said, adding that everyone should be held to the same standard. We do need a level playing field. Parity is important. Smart, clean modern rules that apply across the board, so consumers are in the front row of understanding the rules of the road, he said.

The concept of free also comes up in the debate over net neutrality, mostly because of efforts by ISPs to experiment with new promotions, such as sponsored data or free streaming services.  Some consumer groups have raised concerns about such practices, saying they are anticompetitive.

As Spalter noted during the panel, one eyebrow-raising maneuver in Chairman Wheeler’s effort to impose Title II regulations on ISPs came after the agency adopted those rules and began investigating claims that free or discounted services offered by ISPs were somehow anti-consumer.

“It blows my mind when consumer groups say they need to protect consumers from free services like streaming”, Spalter said. Not surprisingly, those free and discounted services are wildly popular with consumers, he added.

An Open Internet and More Investment Are a Winning Combo