Stopping Illegal Robocalls Where They Start

Voice service providers are leaning into the fight against illegal robocalls.  In the last several years, they have deployed powerful call blocking and analytics tools, implemented cutting edge caller ID authentication technology, and established the USTelecom-led Industry Traceback Group, which has been a gamechanger for both disrupting illegal robocalls in real time and empowering the enforcement community to hold illegal robocallers and their enablers accountable.  Every month the USTelecom-led Industry Traceback Group (ITG) plays a central role in the battle against illegal robocalls. Every month over 400 carriers across the wireline, wireless, VoIP, and cable industries collaborate with law enforcement to trace, source, and ultimately, stop illegal robocalls . . . no matter where they originate. 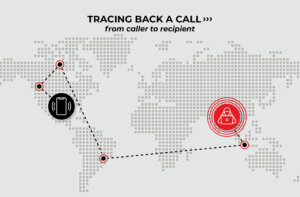 Using a secure traceback portal, suspected illegal robocalls are traced systematically back through various networks until the ITG identifies the originator of the suspicious calls, where the calls entered the United States if internationally originated, and often the identity of the calling party.

Safety on the Line: Resources to Protect Yourself from Illegal Robocalls 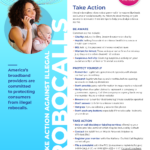 As industry innovators and government are joining forces, our civil and criminal enforcement apparatus is ramping up, and meaningful progress is being made against robocallers. View and share our materials below.  Learn more and download the resources here.

There is an acute need for coordinated, targeted, and aggressive criminal enforcement against illegal robocallers.” Jonathan Spalter

USTelecom is Leading the Charge

Illegal and unwanted robocalls continue to harm and hassle people every day. Consumer fraud often originates with an illegal call, and robocalls regularly interrupt our daily lives. Robocalls and telemarketing calls are the number one source of consumer complaints at many state Attorneys General offices, as well as at both the Federal Communications Commission and the Federal Trade Commission.

Illegal robocalls are increasingly difficult to combat because mass-calling technology can make thousands (even millions) of calls and bad actors can rapidly change tactics to avoid detection. USTelecom is working with government and industry to advocate for aggressive civil and criminal enforcement and provide call-blocking tools to put consumers back in the driver’s seat.

State Attorneys General and voice service providers led by USTelecom are teaming up to combat this pervasive problem.

These efforts are working.  Illegal robocalls are in decline from peak levels, and the combination of traceback data and FCC enforcement in the last year has virtually eliminated illegal auto warranty and student loan robocalls.

More can and should be done to solve this problem.  USTelecom has advocated for additional targeted regulation and enforcement, including criminal enforcement against bad actors at home and abroad.  Congress also should pass the Robocall Trace Back Enhancement Act to protect the traceback process and allow it to evolve to the benefit of consumers at a time of ever-increasing complexity and risk for the registered traceback consortium.

SCOTUS Decision Does Not Stop the Industry’s Robocall Fight

USTelecom President and CEO Jonathan Spalter joined Newsy on October 4, 2021 to share the latest in the effort to combat illegal robocalls. Spalter touted the work of the Industry Traceback Group – the FCC’s official robocall fighter – to traceback and shut down the flow of these calls.