The ITG will continue coordinating industry-led efforts to trace back the origin of suspected unlawful robocalls in the U.S. and around the world. The designation of an industry-led robocall consortium was a provision in the TRACED (Telephone Robocall Abuse Criminal Enforcement and Deterrence) Act.

“This is a vote of confidence from the FCC and a recognition of the value and track record the ITG brings to the robocall wars,” said USTelecom President and CEO Jonathan Spalter. “No one else is doing this kind of work – tracking and tracing the scammers and spoofers polluting our communications networks to the source and getting them to shut off the flow of calls. And when that doesn’t work, federal and state enforcement agencies are happy to take a look at our findings.”

Over the past year, the ITG continued its impressive track record building a robocall fighting coalition and working with industry, federal, state and local law enforcement to trace illegal call campaigns. In addition to working closely with government, the ITG partners with organizations – joining forces to stop the calls that target consumers, damage their reputation and affect their bottom line.

“These are some determined criminals, but ITG is equally determined and laser-focused on fighting back. We’re getting better and faster every day and helping our partners in Washington and in the states bring those responsible for illegal robocalls to justice and disrupting the campaigns ourselves,” added Josh Bercu, Vice President, Policy & Advocacy at USTelecom and director of the ITG.

Earlier this year, ITG released: Combatting Illegal Robocalls, a progress report on its efforts to trace illegal robocall campaigns, particularly under the radar providers who let junk calls onto the network in the first place. 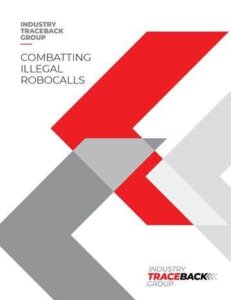 ABOUT THE INDUSTRY TRACEBACK GROUP

Since USTelecom established the Industry Traceback Group (ITG) in 2015, the ITG has played a central and expanding role in the battle against illegal robocalls. The ITG was designated by the Federal Communications Commission (FCC) in July 2020 as the Official Consortium for coordinating industry-led efforts to trace back the origin of suspected unlawful robocalls. Every month, the ITG conducts tracebacks of illegal robocall campaigns amounting to approximately one billion calls. More information on the ITG is available here.